Today both policy-makers and experts are actively discussing possible changes in the government's structure. The reduction of ministry population looks especially attractive. But, as practice and international experience suggest, performance of the entire government is more critical than the number of ministries.

People do not care at all how many government agencies we have. They find it crucial for social problems to be addressed effectively, and public services to be good quality and accessible.

Now Ukraine has about 70 executive agencies, including 19 ministries, 20 services, 14 agencies, and 4 inspectorates. But it is quite hard to say which of them really work as some are under liquidation or reorganization, others have been in this state for several years.

Transformation of government is part of a comprehensive public administration reform actively undertaken by Ukraine since 2016. 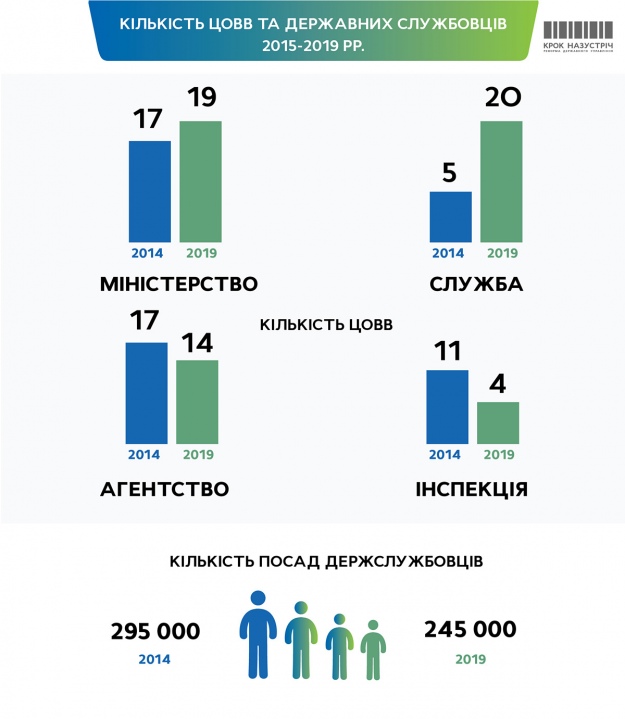 However, reducing or consolidating agencies is not a genuine reform of the government per se. The government's structure should meet the goals and objectives facing the country in general and, among other things, defined by the Parliamentary coalition that forms the government. This is why key functions of ministries and government agencies should be outlined and developed, and redundant or non-core functions cut mercilessly.

The number of ministries is not a decisive factor of the government's performance, either.

It is much more important to identify areas of public policy and clearly allocate responsibility across ministries by covering all policy areas, clearly identifying owners (persons in charge), removing duplicate functions or vague powers.

The main role of the government and, essentially, the state is to take care of its citizens' security, health, and welfare. In terms of effective administration, international practitioners usually single out ten key areas that the government in general and individual industry-specific ministers should be accountable for.

The number of ministries and departments in the government's structure is unimportant, after all, if the government achieves its defined goals, properly uses public resources, and facilitates the country's sustainable development.

The main role of the government and, essentially, the state is to take care of security, health, and welfare of its citizens. 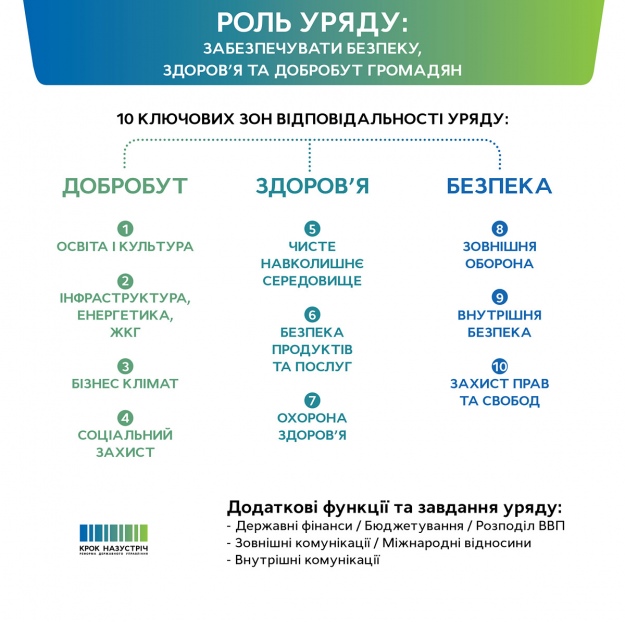 How can a successful government be built?

The government's structure should meet these principles:

1) The functions of policy formation and implementation are separated

Ministries should form a consistent policy by drafting required laws and allocating public finance. Services, agencies, and inspectorates should be responsible for the immediate implementation of this policy, including through the provision of public services, inspection activities, and management of state-owned enterprises. This is the only way that social problems can be resolved and the state's development secured.

2) Creation of one responsibility center

Every ministry and minister should be responsible for a specific area, function, or set of essentially related functions. This is what government accountability is about, when society clearly understands whom to hold accountable and for what.

3) Minimization of a conflict of interest

Functions with conflicting goals should be allocated to different ministries. For example, business development should be separated from social security, environmental protection from industrial development etc.

Authority and powers should be distributed across all ministries based on their goals and responsibilities rather than rely on political affiliations or the weight of individual figures.

Frankly speaking, the current structure of the Ukrainian government and the selection of ministries do not quite meet the principles above. Some ministries duplicate the functions of others. Some are too small to operate as separate ministries.

But, when cutting and consolidating, one should keep the current priorities of the government and the country in mind.

For example, to facilitate EU integration or an effective implementation of the "State in a Smartphone" idea, a government member in charge should be designated and given respective powers, or a new ministry or government agency set up, if necessary. Many EU candidate countries have special EU integration agencies. Poland and Great Britain have digitalization ministries.

The building of a state-of-the-art service-oriented effective system of public administration that can assist in delivering on the government's promises and other reforms, also requires the designation of one government member in charge who will routinely manage this objective and help the Prime Minister. This mission is virtually impossible without his broad input.

Any governmental structure should meet the state's relevant objectives and goals.

Experts are of the opinion that an optimal number of ministries for Ukraine is about 15. However, the ultimate number and names of ministries are purely a political decision that depends on the government's priorities and coalition arrangements.

It is most critical to clearly define responsibility areas of each ministry to be represented by directorates of the policy in question. Ukraine needs about 75 directorates, or 5 to 6 per ministry.

When speaking about uniquely Ukrainian features, the Ministry of Regional Development, Construction, Housing, and Utilities of Ukraine is vital. On the one hand, such a ministry is not available in many countries and is not listed among the above ten responsibility areas of the government. On the other, Ukraine has clearly stated decentralization to be its main priority.

So, MRDCHUS plays a key role in this process today and will continue so for at least another ten years. This is why, as a coordinator of the decentralization process, the Ministry is critical to the success of the reform.

Crucial problems that should also be resolved during the government reform include improving coordination and cooperation across ministries (the so called silos effect) and delegating ministers' individual powers to help them move away from regular micromanagement and fire-fighting and finally focus on strategic planning and matters of the country's long-term development.

By abolishing absolutely all ministries from 2007, Scotland's government came up with the most drastic and quite effective solution to overcoming these challenges. Now the Scottish government is made up of 12 ministers who, instead of separate ministries, have 30 policy-making directorates employing civil servants that cover all of the government's areas and objectives.

Ukraine is not ready for such drastic steps yet. But we do need a comprehensive reform of the government and public administration. This is a priority and requisite condition of continued EU integration.

Key objectives of this reform include reducing outdated and duplicated functions of the state, creating and developing necessary functions such as strategic planning, policy analysis and making, digitalization of all public administration processes.

It is on the basis of defined priorities and well-aligned functions that a new government and flexible and effective agency structures can be set up, experts can be engaged for specific tasks.

As suggested by international experience, a well-performing, well-aligned, and accountable government that continuously works with the Verkhovna Rada of Ukraine is much more important and effective than the number of ministries and ministers.

05.10.2019
Operation Against Corruption: what SSGCC will undergo and be doing later
More
V Previous V Next
More news