According to the Minister of the Cabinet of Ministers of Ukraine Dmytro Dubilet, the Ukrainian government has voted in favor of a Draft Law aiming to make employment record books non-obligatory.

“At our today’s meeting, we have voted in favor of a Draft Law, which aims to make employment record books non-obligatory. Now we’re waiting for the respective voting of the Verkhovna Rada,” – wrote the Minister at his Facebook page.

The official also added that the Government of Ukraine adopted a Resolution, which stipulated that citizens would be able to ask their employers to provide information about their track record before the year 2000 electronically.

“Currently the Pension Fund of Ukraine possesses information starting only from the year 2000,” – noted the Minister.

In the future, such step will allow awarding pensions and other social benefits completely remotely without a need to visit the Pension Fund.

“Finally, we have also adopted another cool thing – a Resolution allowing getting electronic services of the Pension Fund (for example, all kinds of references) not only with the help of a digital signature, but also with your BankID. A digital signature is still not widespread among Ukrainians. However, many people use services of Internet-banks, such as PryvatBank or Monobank, or some other banks,” – wore Mr. Dubilet.

In its turn, the Ministry of Social Policy has issued an explanation about a transfer to a digital employment record book. In particular,

Besides, according to the report published by the Ministry, such step will provide each citizen with an option to get an extract from the Pension Fund in a few clicks, using a digital signature and a person’s user account at the official Pension Fund’s website, without any fear of losing the employment record book. Apart from that, 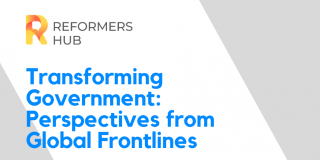 13.04.2021
With the support of the EBRD and the EU, the Innovative Platform Reformers Hub for the exchange of knowledge and experience among civil servants launched
More